The phases of alcoholism mean that the alcohol-related disease does not appear suddenly, but in different periods they have different degrees of severity. This application was first proposed by an American physician of Czech origin, Elvin Morton Jellinek. The researcher based his conception on his own observations, which showed that every case of alcohol addiction is preceded by the occurrence of warning symptoms. If they are noticed in time, the development of alcoholism can be stopped even before the appearance of advanced symptoms of the disease. For this to happen, however, a quick and decisive reaction of the environment is necessary. Without it an addict is extremely difficult to stop drinking – left alone becomes more and more, and her/his alcoholism takes on a chronic character – treatment of alcoholism in this case is very difficult. Now, a little bit more about each phase:

1. Alcoholism phases: pre-alcoholic phase (preliminary)
The first phase, called pre-alcoholic or initial one, can last up to several years and does not arouse any suspicion in bystanders as well as a potential alcoholic. Symptoms characteristic for this phase do not differ significantly from the behavior of people reaching for alcohol on an occasional basis. The person’s approach to alcohol is decisive. Potent alcoholic, unlike people less exposed to this disease, discovers that drinking is especially pleasurable and relaxing for him. Therefore, he begins to treat alcohol as a specific means to improve his mood – he reaches for it whenever he has a bad mood, is depressed or something upset him. At this stage, he does not drink in solitude, but subconsciously seeks for the occasion – often goes to parties and social gatherings, where he has a chance to drink. With time, the reflex of reaching for alcohol in difficult moments is so strong with him that without an “auxiliary” he can not cope with the internal tension. As a result, he develops tolerance to alcohol and has to drink more and more to reach a state of intoxication.

2. Alcoholism phases: the warning phase
The warning phase begins with the appearance of the first “palimpsest”, or, in other words, the memory gap. This moment is commonly referred to as “breaking the film” – the man remains conscious (does not lose consciousness), and yet he does not remember what happened to him after getting drunk. For this phase, the repetition of palimpsests is characteristic even after drinking a relatively small amount of alcohol. In addition, you can observe several characteristic behaviors in a person at risk of alcoholism:
– accelerating the pace of drinking and initiating “queues”;
– a big change in behavior after alcohol – a person so quiet suddenly becomes the life of the party, he talks a lot, he is bolder, he gets rid of inhibitions;
– clandestine drinking – drinking glasses in secret, to quickly get into a state of intoxication, also lonely drinking before the party, to be “seasoned”;
– drinking without opportunity, alone.
The appearance of remorse is also typical of this phase. The potential alcoholic is starting to realize that he drinks too much, but at this stage he still does not allow himself to be aware that he has an alcohol problem. Instead, people try to justify themselves and rationalize their behavior (“everyone has the right to drink from time to time, I do not do anything wrong”). He responds with irritation to the attention of the surroundings and clearly denies accusations of alcoholism.

3. Alcoholism phases: critical phase
The critical phase begins when the alcoholic loses control of drinking. No plans or promises made to each other or to relatives stop him from reaching for a glass. There are still short abstinence states, but sooner or later they end up drinking again. The whole life of the addicted person begins to revolve around alcohol – her main occupation becomes planning when he/she drinks, alcohol or raising funds for this purpose. Alcoholic neglects the family, work, loses interest, stops taking care of its appearance and surroundings. His sex drive is falling. At the same time, he still can not admit to himself that he has an alcohol problem – he is constantly inventing new excuses, and reacts aggressively to criticism. The first physical symptoms of addiction appear, the so-called alcohol craving. Drinking takes on a continuous character with short periods of abstinence – in this way the alcoholic tries to prove to himself that he still has control over drinking. The rapid decline in self-esteem, a sense of emptiness and helplessness is also characteristic for this phase.

4. Alcoholism phases: chronic phase
The most advanced phase of alcoholism, in which the alcoholic gets rid of all remorse and inhibitions. He drinks almost constantly, and takes the first dose of alcohol in the morning. He is constantly intoxicated, alcohol tolerance is rapidly dropping – just a few glasses are enough to get completely drunk. Constantly high levels of ethanol in blood have a very negative impact on his health: there is a decrease in intellectual functions, psycho-motor slowing, sexual libido disorders, changes in character (disappearance of higher feelings), liver and nervous system. Each attempt to exit the alcoholic line ends with a severe withdrawal symptoms – hand tremors, headaches, general weakness, vomiting, sleep disorders, and anxiety. Chronic alcohol psychosis may occur. At this stage, the alcoholic goes back not only to typical alcoholic beverages, but also poisonous alcohol substitutes (e.g. denatured alcohol) can drink for lack of money. Due to poisoning, it is increasingly frequented in sobering-up centers and hospitals. Drinking constantly, in a continuous sequence eventually leads to total exhaustion of the body and can cause death.

Does any of the above phases describe your past behavior? It is never too late to change – remember this please. 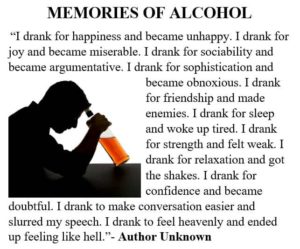