There is no couple who would not argue, but everyone has a way of dealing with the conflict. It turns out that how we deal with such situations tells a lot about the future of the relationship.

Dr. John Gottman, one of the best-known therapists in the US, based on his long-term observations on couples and their quarrels, developed a set of tips suggesting what to avoid that the relationship lasted long and happy. Dr. Gottman also distinguished four most common groups of behaviors that generate conflicts in a relationship.

Below we present the “Four riders of the apocalypse” according to John Gottman:

It is good (and even healthy) to talk about what does not suit us in our relationship. The problem arises when such remarks become criticism. Comments refer to events or behaviors that we want to change, while criticism affects the partner personally. When you start to generalize and say that your partner “always” or “never” does something (or does), you start to criticize him/her.

What to do to avoid it? Try to talk about what you do not like in a relationship without blaming your partner. Give expression to your sadness, but do not talk about guilt. In addition, avoid the words “always” and “never.”

The symptom is that when someone suggests that we have done something wrong, we automatically answer “It’s not my fault!”, Usually adding some excuse to it. Sometimes, we preventively go to defense before someone accuses us of something. Defensive attitude may also manifest itself in the fact that we respond to our partner’s grievances. For example, when he accuses you of not washing dishes after yourself, and you answer that he never litter.

What to do to avoid it? The problem with a defensive attitude is that it does not allow you to see your role in the problem raised by the partner. You focus only on defending yourself that you do not pay attention to what’s bothering your partner. This leads to increased frustration in the relationship. Instead, try to take responsibility. If your partner is communicating to you what is wrong in your relationship, he/she will take his/hers word for it. Think about whether he/she is right and what the problem is.

Everyone sometimes gets angry, but if you insult your partner during an argument, it is a clear sign that something needs to be changed quickly. This attitude is the best sign that divorce is hanging in the air.

What to do to avoid it? Instead of concentrating on things that annoy you, try to create a culture of appreciation in which you both focus on what you give yourself. When you begin to feel negative thoughts about your partner, try to imagine what your life would look like without him.

4. Building the wall of silence

It’s not about what you do, but what you do not do. Imagine how the wall would react if you told her about your feelings. If you are silent or answer half-words, you refuse your partner any communication. This happens most often when we are overwhelmed by the partner’s negativity.

What to do to avoid such a situation? Instead of avoiding answering, taking a closed attitude, tell your partner that you need some time to answer. Tell him that you are upset / upset and you need to calm down to get back to this conversation later.

What is the most difficult for you in your relationship? What you would like to do about it? 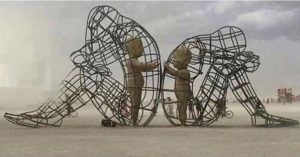